News
Events
Education
Basics What Is Sleep? The Ultimate Sleep Guide Stages of Sleep COVID-19 and Sleep How Much Deep Sleep Do You Need? How to Fall Asleep Fast? How to Sleep During Pregnancy Bedroom Ideas Sleep Glossary
Sleep Solutions
Mattresses Different Types of Mattresses Ultimate Guide to Mattress Sizes Mattress Firmness Scale How Often Change Your Mattress? Mattress Thickness Pillows Ultimate Guide to Pillow Sizes How to Fluff a Pillow How Often Change Pillows? How to Make a Pillow Sleeping Without a Pillow How Many Pillows Should You Sleep With? Bed Frames Box Spring vs Platform Bed How to Fix a Squeaky Box Spring Bunkie Board vs Box Spring Floating Bed Frames How to Attach a Headboard to Bed Frames How to Reinforce a Bed Frame? Sheets Toppers Blankets CPAP Matress Quiz
Sleep Disorders
Healthy Sleep
Nutrition and Sleep
Home » Education

The Difference Between King and California King Size Beds, Mattresses and Pillows

Christian Flapton
Medical Writer
A full-time physician, medical writer, editor, and internet entrepreneur. Has a Doctor of Medicine degree (MD), as well as a MPH (Master of Public Health).

Medical Advisory Team
Includes well-known professionals, who together provide decades of sleep medicine experience that enables Talk About Sleep to fulfill its mission of creating access to high-quality sleep information, education, and support.


Learn about our editorial process.

Talk About Sleep is reader-supported. We may earn a commission through products purchased using links on this page. Learn more about our process here

If you’ve been doing a lot of shopping for bedding and sleep gear, you’ve more than likely come across the terms “King” and “California King”. They seem almost identical, but one just sounds more…glamorous. Perhaps this is due to the associations laid-back sunny California conjures in the minds of the general public – but what exactly is the difference between the two sizes, and which one should you go for?

King size bedding, also known as the “Eastern King” together with “California King” refer to bedding items that correspond to dimensions set for this size by manufacturers. The term originated mainly from mattresses and beds, and only then spread to smaller items such as mattress toppers, comforters, and even pillows as part of a marketing strategy, but has now become a standard method of classifying these products. Initially, mattresses and beds were made without a standardized system of dimensions, but over time it became apparent that products made on the West Coast tended to be larger in dimensions, even though this was not intentional – for California, this was the standard. After the major bedding companies came together to create a coherent sizing system, the Eastern King size mattress measuring  76 by 80 inches was dubbed the “King” size, whereas those larger mattresses from the West Coast have since been known as the “California” King, and measure 72 inches wide and 84 inches long.

So, what’s the difference between King and California king sizes?

Here’s a visual comparison of a King and California King mattress: 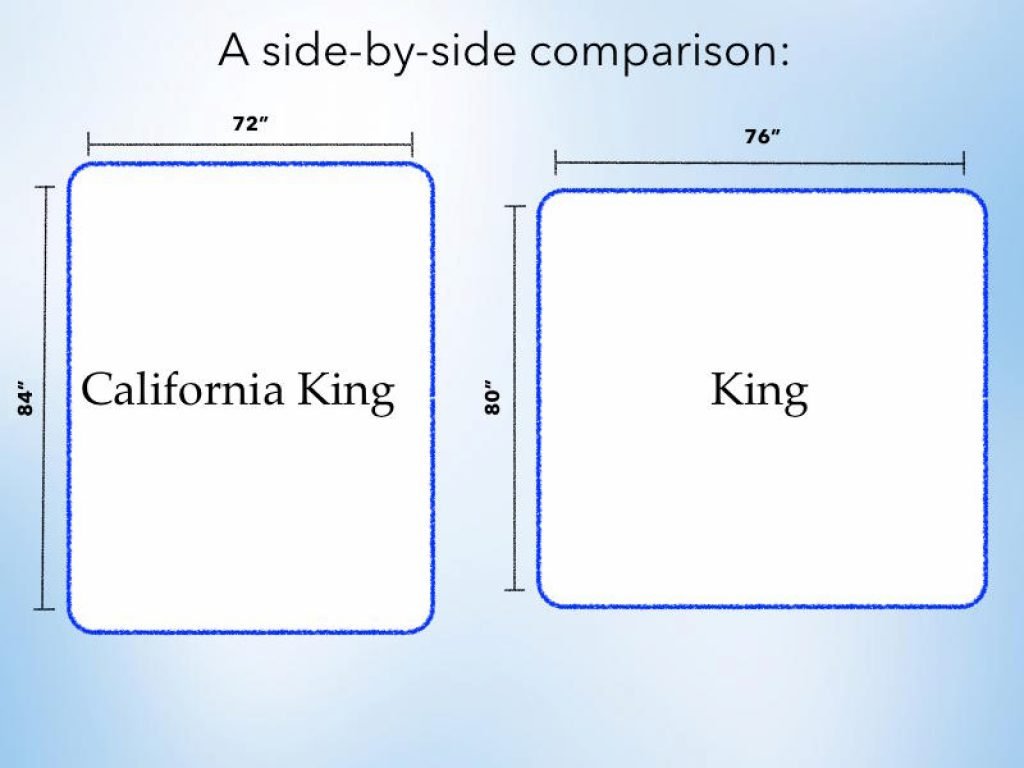 What’s the difference between a King and California King bed – which one is better?

It all depends on your preferences, but as a rule of thumb, if you’re on the tall side, opt for the California King, as it is better suited for individuals with an above-average height. If you like a lot of space to move around on, and sometimes need some personal space while sleeping with your partner, or are a bit larger than average, choose a King size bed. Consider choosing one of the best mattresses for heavy people for a comfortable night’s sleep, together with a sturdy and durable metal bed frame. Whether it’s a King or California King size you’re after, it will provide you with the peace of mind you need to drift off to a safe, peaceful sleep night after night, confident in knowing that this is the most reliable of bed frames!

What is the size difference between a King and California King comforter? Can I use the same-size comforter for both Cal. King and King size beds?

Ideally, you’d want to get a size that corresponds to the bed size that you have, but the size difference between these comforters is not that much of an issue, as the main purpose of this item is to cover you and your partner – so as long as you’re not fighting for the blanket, the dimensions aren’t as big of a deal. In terms of numbers, the two types do differ and the size difference between a King and California King comforter is pretty significant. The former measures 86-88 inches (L) by 102 inches (W), and the latter is bigger in both length and width, at a whopping 96–98 inches by 107–110 inches. If you want a comfy sleeping experience, opt for a comforter that is the same size as your bed frame and mattress.

What is the difference between King and California King sheets? 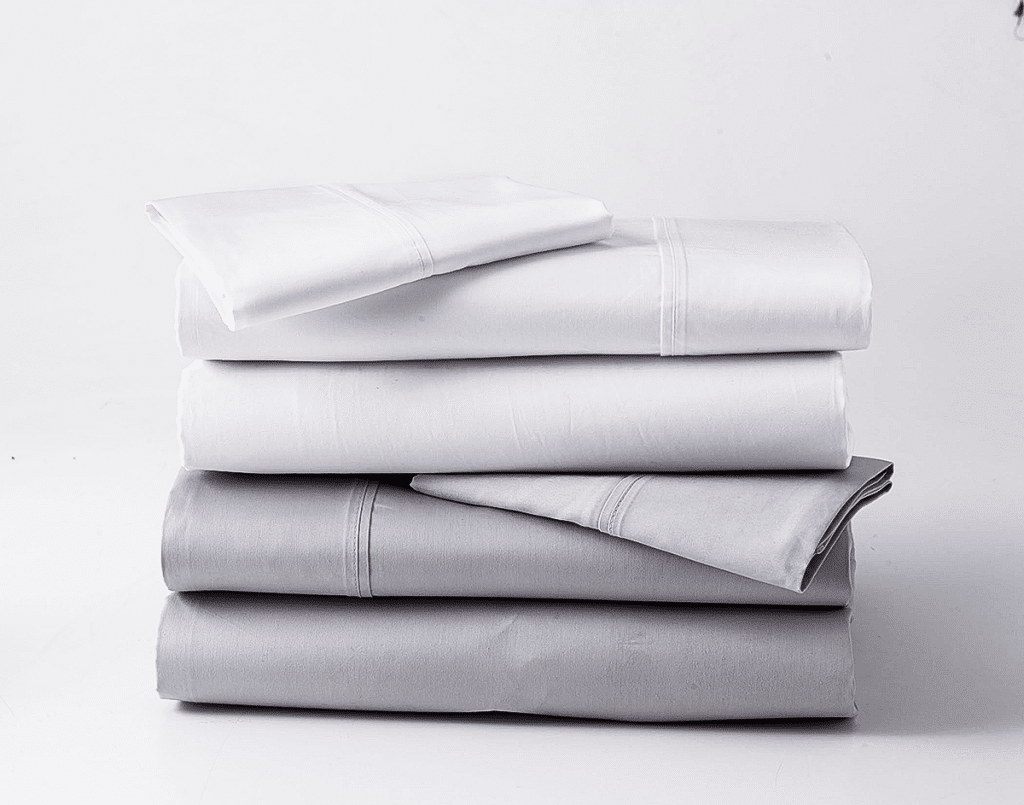 This simply corresponds to the difference between a King and California King mattress. The King size sheet will fit comfortably over the King size mattress, and any mattress topper that you may have underneath, and the same goes for the California King sheet and mattress.

Is there a difference between California King and King size pillows?

Yes! What’s interesting to note here is that a California King pillow is the same size as Regular and Queen size pillows, measuring 20 x 36 inches. The King pillow, on the other hand, is significantly larger, at 20 x 36 inches. The former two require a standard pillowcase, whereas the latter calls for a special King-size pillowcase. If you love a large pillow, then you’ll love the sleeping experience you’ll have every night once you find the best King size pillow for your needs.

We hope we’ve helped you to choose the best size bedding.
Sleep well!